The Kid's back in town

Like this Election Day on which we jam, we have potential to make this jam a winner or a loser. You have to vote for the guy who cleans up Times Square, let's us shop safely at the Dine-O-Mat and yet manages to chase all the crack attics to the dark canyons of 38th Street. As I write up the page at 12:30 a.m. after election day it is still up in the air if the people of New Jersey erred and voted in McGreevey. I think we will prove victorious and Christine Todd Whitman will squeak by with the win. Just now at 12:30 a.m. McGreevey conceded. Yes. 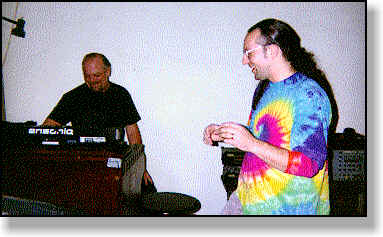 Larry and I settling into our new instruments. It's still new and exciting for me. This guitar of mine seems really nice and I'm psyched to become aquatinted with it. It's warm and smooth! By the way, if someone has a spare shoulder they can lend me, it's better than a hand. We didn't play enough to make my shoulder hurt though.