A freaky night with great music, bad food and a wide variety of kind and unkind guests.

Another great freaky night of the freakiest place on earth, or at least on 38th street.  There was a lot of cool stuff going on and trying to remember it two night later may be difficult.

After the keying of Larry's car last he and I decided to park in lots.  He parked on 40th which was open past 11:00.  I on the other hand parked at the place on 38th that closes at 11 sharp.  Thanks to Larry, I remembered to get my car at the end of halftime.  It was a bummer but it was pretty quick and invigorating.  The worst thing is that it's so easy to forget about it.   It's going to happen some day.

The Freakboy had us all freaked up for the evening by supplying the prejam munch.  Corned beef and pastrami from the Carnegie Deli is almost as good as it gets, and it was GOOD!  There was talk of the prejam Gyro II as the main meal next week.  Who knows maybe we can pull it off.

Just as most of us were nicely satisfied with our culturally enhanced sandwiches in comes the culturally challenged Spillboy arriving in a rail-car with with Commandant Klinks bohemian daughter wrapped around his tattooed forearm.   She stated she had a problem with our Jewishness in a disturbing way but in the end, she seemed to like the three songs she and Kabalah Boy hung out for.  Whatever happened, there was a very freaky thing going on in a very unkind way. 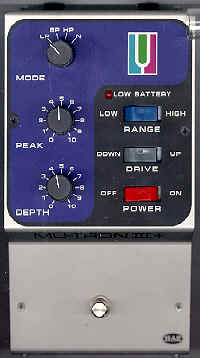 Larry M. had some type of kid duty to attend to and couldn't make it until the end of the first set.  Coffee Boy Mitch was cool enough to sit in for the first half and provided a nice steadiness which we took advantage of.  This coupled with the missing Brotman made for a more structured and open environment and it's amazing how we fill in all the open pours of the music dermas.   Nooks and cranies are no match for Deadstein oleo.

I surprised Larry B. when I showed up with my new Mu-tron III+ Reissue that I picked up at the Philadelphia Guitar show.  I assume this will be a great effect for me and I'll explain why.  Like the Grateful Dead, this Mu-tron is sensitive, sophisticated and can't be fully enjoyed at first play.  I can tell, I am going to have to get used to it, dial it in for what it does well and we will have a good time fluctuating together.  The thing sounded real good in my bedroom but when it came to the jam I didn't do a good job of using it.  That's good, because the RP6, which I could tell is just a cheap thrill, was a blessing when I first played it. The Mu-tron on the other hand has more character that needs to be polished to bring out its grain.  It will add a new level of freakiness to the sound of Deadstein when used appropriately.   I finally felt comfortable with the sound I got out of it during the Shakedown Street.