Special Larry Gindoff birthday show commemorated with a totally acoustic evening without air conditioning. Actually my birthday was last Wednesday but I forgot I wanted the acoustic thing so it was put off six days.   Kevin was missing as he is taking is summer sojourn.  Dave is loving the time on bass and it's a good thing because Kevin would have walked out on the acoustic jam.  No amplification, no PA, no effects.  I played mandolin all night, It was so acoustic that we played it upstairs. Although it was a sweltering summer evening and we decided to play upstairs where there was potential air conditioning but it was too noisy to use.   It was hot but everyone indulged me for the good of the night and I thank everyone for it.

The Hutch stopped by with his brother Jay to check us out.  Not only did they not get Kevin but they got acoustic Deadstein, upstairs without air conditioning, sappy slow songs they never heard, and to boot they couldn't talk.  I give them credit for putting up with us for most of the first set.  They left after the Jack-a-Roe.  Get set for a Jay Hutch party in Sprata, NJ pig roast  and all, around the 3rd Saturday in September 1 p.m.- dark.  Invites allowed. 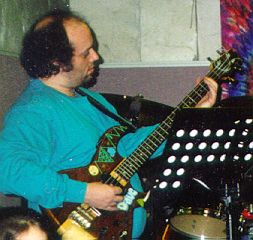 Johnny had planned a long evening a quiet sleep upstairs in the cool air but was subject to a hot evening of sweltering acoustic music.  I know the heat especially hurt Scott and I really appreciate his effort and indulgence in the jam.   It really was a Deadstein first with the serious acoustic thing.  I'm listening to the DAT of it as I type this (Sing Me Back Home) and it's going to make a great CD,  It sounds real good.  I'm impressed with Deadstein, we pulled off the tough acoustic jam.  Brotman evening pulled off the bongo's without ever doing them before.  The singing sounds great, clear and present.  I still impressed with how we stuck it out.  Playing many new songs and many self contained songs.

I know Scott had a lot of trouble getting through some of the slow ones like Sing Me Back Home but he persevered, he took a veto and blew off the ballad of Casey Jones.  If there was any fault with the music was it could have been a little faster and crisper, espcially the fast songs.  Little Sadie is an example of this, it was a tad bit dragging but well done never the less.  Larry and I had the riff going simultaneously well for a while at the end.

I was even impressed with the Dawg's Walt'z, it was really auhentic in the soul of that song.  It really was sweet at times.  We practiced a bit on the Shady Grove,  Pulling a doing it twice off in serious fashion, so although we didn't play the Casey Jones, we did do the the Shady Grove twice, it was long also so there were lots of songs played.  Seventeen total songs and there were very few very short ones.

How about Jenny Jenkins?  TRister's an expert at that one,   we had that rosa cozy, fiddle a foldy thing down.  Scott's egg playing was great during the Freight Train.  WE did the first Amazing Grace in Deadstein history.   In it's bluegrass texture and wrong chord formation it was more of an Amazing Disgrace as far as Dave was concerned.  It was preety good.  Fastest Amazing Grace done this decade.