A full Freak-load of hot and cold jamming

It was the return of the band for a big night of big jam.  It was a hot and cold night because the music was hot for the most part but it was tough for me to hear because of the tail end of a cold.

Kev and Scott also had cold elements to their health.  There were no guests at all.

A few business issues to take care of.  Larry needs to know what Wednesdays are open for the summer so we can play a gig at the Crossroads bar in Garwood, NJ.  I say we aim for July 26 or August 2.  August 9 and 16 are both no good for us.  Get prepared for my acoustic night for my birthday on June 27.  I'll figure out the song I want during this week and let you all know.  Check out my new band sketch on out Deadstein member's web page.  It's my best work to date.  Finally, check out our guestbook for a yearning Deadhead from India is getting his freaky kicks off by following our quest to play this music.

We started the night with the big bang of the Bucket and to my surprise the big bang was self contained and not annoying.  I thank everyone who was involved in that showing of self control. 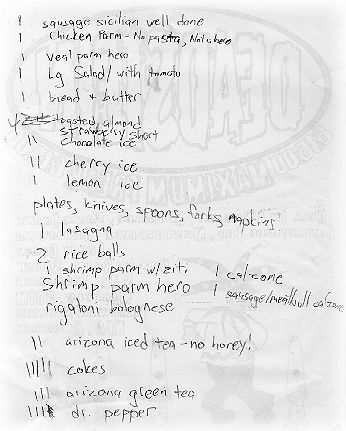 I think it had a payoff in that it allowed us to build up consistently throughout the song to a feverish pitch.  This was a motif or a motus-operandi that we used effectively throughout the night.  Birdsong had some real good wandering jams based on this principle.  That may have been the best moments of the night as we played together quite well.   This was followed by a powerful Let it Grow with Andy's telecaster piercing the asbestos ridden air.  Actually Andy's pre-pizza Pizza Tape renditions were quite enjoyable especially Man of Constant Sorrow.  This was ironic since Andy refused to eat pizza out of protest or something.

Trister wore out halfway through the Terrapin and bolted.  This left us with one last song to put a flavorful icing on the jam cake.  We almost didn't make it as we  unenthusiastically suggested songs.  We ended with a Jack Straw which was a real good choice because it rocks and had some subtle moments to it.

It was a very humid night with a drop or two falling.  It was also a night of Chuck Noblock making 3 throwing errors in one game.  Puerto Rican men are being arrested by the bunch for abusing, groping, harassing, etc. women during this weekends Puerto Rican day parade.