Due to the scheduling issues last week with Kevin, not being able to play on Thurday due to an Inlaw Hanukkah, we squeezed one last jam in for the decade on Monday, December 30, 2019. This was quite an accomplishment showing the love and deication to Deadstein and all it brings to us. As we close out the year, we reflect back at 2019 and we see a record setting 54 jams played.

We had the bullpen increased to include "more and better" as we saw the inclusion of Rennie and Drew to our stable. They help us get to new levels. Oddly enough, the Wallstreet group brings us a roster rich with people to help us out in a pincb when we need a jam to continue to Woo. While my continued improvement in playing lead and guitar in general leaves us satiated by the end of the night, it would be great to see more of Andy at Deadstein in 2020 is at it's best when he is playing lead. Maybe we can get Kevin to practice and learn at home in 2020 now that he is an empty nester and it' s about time. Maybe Rich will find a bigger iPad, speaking of which maybe Kevin could get into the iPad groove so we can expand our reptoire and be more agile now that the future is here and it permits it.

We also got the weekly rotation of Lee and Drew which is working nicely where it helps releive the load and burden that is associated with the Deadsein commitmment. Due to this, Lee and Drew were jamming together for their first time as Scott was the odd man out seeing Gov't Mule at the Beacon.

Drew came in loaded with celebration with a cooler and Champagne on ice and a scrumcious vanilia cake sayng "2020 Woo!" and the celbratory feeling was in the air.

Andy called in sick for this week so it was the five of us in Carroll's Room 4. Without Scott there I don't have enough microphones for the 2 drumms but due to great timing, I just purchased and received a great little package of variety of microphones. I now have enough to mic Drew and Lee and now add snare drum microphiones to boot. I am happy to report all the microphones seem to be working and sounding as good as I can expect. For the record the new microphones I used this week include 2 Audix and 2 CAD drum mics from their standards drum microphone kits as well as an MXL 991 overhead in place of where we usually place Scott's one remaining Neumann. All I can say is the drums sounded good regardless of the mics and so did the rest of the band. 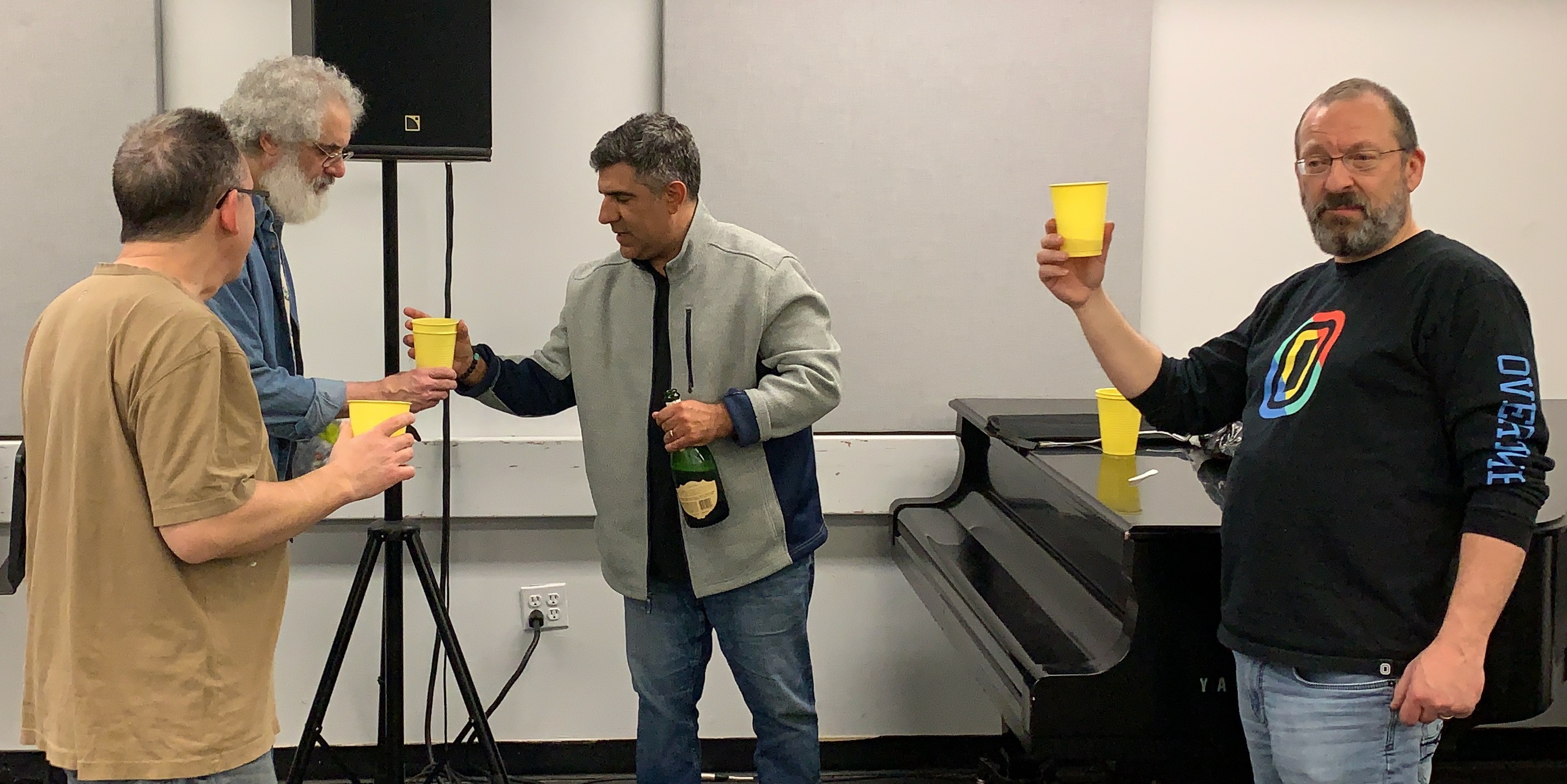 We did a couple of repeats from last week including the Helpslip, though the transistions weren't great, it was a nice trend to end the decade with two weeks with a Helpslip; a very good indicator. We had fun with the Beat It starting with 19 hits to celebrate the close of 2019. We are good at that song and I llook forward to hitting 20 of them next week. We did this last year spanning the turn of the year. Row Jimmy was reaaly nice and structurally feeling good. The only major flub of the night besides the Slipknot transitions, which I don't even consider flubs since I don't expect to hit them, was the Terrapin where Rich's lack of a better iPad led him all over the place leaving us stranded to our own devices. I screwed up on a very good and usuall Wang Dang Doodle by not hitting record until the last 20% of the song. That was a shame as it was one of our better songs of the night.

It was a beefy night for the most part with not too many songs but lots of high caliber numbers, no straying from the Grateful Dead's beautiful garden they provided us; not tempted by the songs of others. This was a night dedicated to the Dead and thhe old and new year. Lazy Lightning was really good and the slow Deal was slow but OK. Shakedown annd Samson proved to be the meaty standards that they are. Then we kept slicing it thick with the Terrapin --> Let It Grow which was big, bold and flawed. We ended the decade with a sublime Peter, Throwing Stones, Sugar Mag which just made a statement that we don't need to cap off the Twenty-Tens but need to just cap the night and continue our assault on the next decade.