Everyone's back for a supurb night of A-list hits.

Everyone was back for the first time in a while and we played hard, with a vengeance.  We played so hard we went right through dinner with a very long first set.  It goes to show, it doesn't matter if you eat or not, you cannot get a second set.  You can get a very long first set though.  Not a guest to hear what may have been one of Deadstein's finest moments.  A riveting evening filled with lots of great, inspiring music.

There was good tempo, listening, dynamics and all the other things that make a hot night.  We played with seriousness sense of purpose and overall goodness.  It wasn't until the Franklin's Tower that we had a stumble.  We had an intense Stranger.  It was powerful and it worked its way to a smooth and cool jam before the final whip which came up from the calmness of the groove like a whip should.  We had some meaningful quality jamming, that was almost spacey but it was too good to be called space.

Larry's midi was messing up during the lead of the Scarlet leaving Trister to play an over-extended lead.  Larry's loss is our gain as the lead was rippin'.

Andy's reverb was on the blitz but it didn't stop his amp from piercing some great notes as he was rippin' in anticipation of heading onto the fishin' boat directly from the jam.  He's in lame-duck mode as he's hitting up the Hudson Canyon in transition before he stats his new job.

I forget the transition into Estimated, but I assume it was good as our timing was great throughout the song and the night.  It was so good that when we got to end the Estimated after the jam the Scarlet riff came in on perfect timing after the last last seventh beat of the Estimated.  It was shocking how it worked so well.  I don't want to fail to mention how good the lead in the Estimated was, that thing also cooked.

The Help on the Way was about as good as we've played it.  It was tight sounding comfortable and good.  Andy and Larry exchanged leads in the verse and both were great as we all got through both of them without a nick.  The exchange of leads was done by Larry and Andy nicely throughout the rest of the night.

We did a real good transition into Slipknot and it It lead to the really powerful, building jam that also lead us to an unbelievable whip.  The best I've heard out of Deadstein to date.  Unfortunately the startup of Franklin's floundered a bit but it rectified itself to some hot exchanges including lots of Chinacat style riffs from all of us. 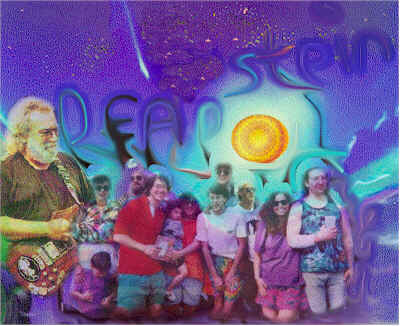 I could keep going on but time precludes me.  Maybe someone else can recall some good moments.  In short other good moments included:

Till we meet again for those showing up to Davefest, Saturday night at sometime, somewhere.