While it was the eve of the holiest day for most of the western world it was it was not so for Deadstein.  We took advantage of this not so odd juxtaposition of Christmas and the second night oh Hanukkah to throw a Deadstein holiday party for all the those kids who don't wake up on Christmas morning to a tree full of presents and parents preparing the traditional feast of jellied ham and white bread with the Kraft Mayonnaise waiting in the pantry.  This was a night where all the chosen freaks had a place to bring their chosen brethren to come and enjoy the merriment that can only come from the one and only "Home of the Freak." 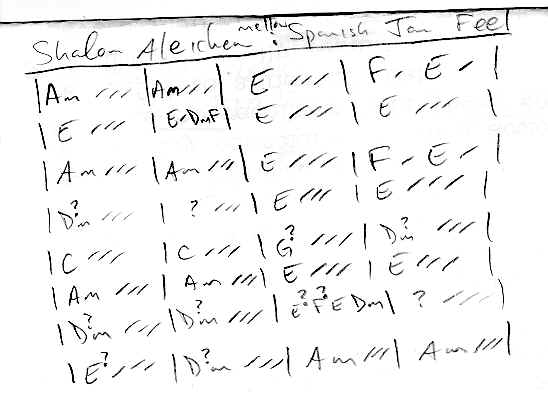 There were many guests who came to experience the festival of lights and the miracle of freak.  In total, about 50 chosen freaks, including couples and kids showed to party.   In addition, about a half dozen non-chosen freaks chose to party with Deadstein on Christmas Eve.  That is the spirit!.  Peter, the heavy left handed substitute drummer, and his clan were among those whose light hair and eyes stuck out in the predominantly brown hair-eyed and olive skinned colored crowd.  Finally, there was some white haired, muscular, goteed looking English mod guy who was strutting his stuff throughout the room.  During the wrap up of the night the Three Wives Club of Debbie, Natelie and Lisa were yentaing about how sexy that guy was when Debbie had the best line of the night saying, "Yea, but Jewish guys don't have bodies like that."  Johnny and I laughed at the line, it was true and funny and I managed to tastefully not respond with some truly insulting comment about Jewish women.  Nevertheless, as I was still laughing down came Larry B., schlubbing toward us, and I realized Debbies words were quite true.

Another funny line of the night happened at the end of the first set when Mollie Gibson screamed "Hey Freakboy" and Mathew expanded by stating, "They call him Johnny the Freakboy because he is a freak."  Kids today just have no respect for their freaky elders.

Also in the crowd as best as I can remember and know include my brother's family (Jay, Jaimie, Rachel & Lauren) by Sisier-in-law's bother's family (Jon, Laura, Josh & Sarah).  Also there was Andrew the flute player and his family who played with us for the first set.  Johnny Spillboy was there.  Other Gibson wannabee's who I don't remember were also there.  Conspicuously missing was Kevin and his family and no so   conspicuously were the Brotmans.

Chicken wings, good latkes, pigs in the blanket, salad, cake, soda, beer in the filing cabinet, Krispy Kremes just to name a little.   Scott and Lisa deserve a lot of credit for putting the whole thing together.   It was a beautiful time.