Multi-tracking for the 3rd week in a row

Deadstein's primary guest this week was the venerable Mackie MDR-24 multi-track recorder, making its appearance for the 3rd week in a row. Not making his appearance was Alan, who was our only no show as he was vacationing in the tropics. Short of that we had no musical guests with Donna singing with us for the middle part of the jam.

After last week's themed evening based on the 1/10/79 Coliseum show, we had not such plan for this week. I was just hoping to get a good recording of some good music after having a good time. I think for the most part, the goals were accomplished.

As far as recording, things were relatively easy for me because nothing had been moved from the studio from last week. This meant I had the same mixing board, containing only 8 full channels as last week, but the extra mic stands were in the room, not moved from last week. Even the small extra screw-on boom stand I brought for Scott's kick drum, and forgot to take home with me last week, was left in situ waiting for me to use. What I did change out this week, was to leave my Behringer 8-channel digital pre-amp at home and I substituted it for my Mackie small desktop mixer. It has 6 pre-amps in it, even though when I got to the jam, I found out channel 5 was dead, so it really only has 5 channels in it. So in total, I had 8 channels from the mixing board and 5 from my Mackie, for 13 channels in all. That was just enough for this week and I'll have to figure something out when Alan gets back. Most likely I'll expand the use of the mixing board's sub-outs so I have more than 13 tracks at my disposal. Of the 13 tracks covered: 1-4: Vocals (Scott, Rich, Donna and Larry), 5 Piano, 6: Guitar, 7: Bass Direct, 8-10 Lee Drums (kick, snare and overhead) 11-13: Scoot drums (kick, snare overhead).

The reason I switched out the Behringer 8-channel pre-amp for the Mackie analog board was because the guitars from the previous 8-14-2013 jam had a disconcerting sizzle to them that I am thinking wasn't necessarily a digital artifact as much as it was an artifact of a bad (cheap) pre-amp. I say this because I didn't notice the sizzle on the 6 drum-tracks recorded though it. Maybe the SM-57/guitar combo wasn't good for the Berhinger. More investigation needs to be done to determine the the Behringer unit is destined for the scrap heap or not, because it is a lot more convenient to use the Berhinger if it sounds okay. Nevertheless, sound is what really counts, and the tracks from this week's jam all came through without any cacophonous artifacts to worry about.

Funny, last week I tried to perform the mixdown simulating Kevin's desired amp setup as applied to the direct out feed I recorded of his bass. I split the bass track into two channels and applied both high end (guitar) and a low end (bass) amp models to each respective channel. After some work in trying to control the low-end bass, I approached the sound Kevin was looking for, if not going a bit too far on the high end of things. This week I figured I would go back to basics and try to get Kevin's desired sound just using one standard bass amp model on his direct bass recording. At first I failed miserably. Kevin thought I did everything wrong when presenting his bass as an overly blobby mess of subsonic tones. This wasn't the sharp attach that sticks out of the mix he was looking for. I took Kevin's criticism to task and got back to work to reshape his tone. I applied an additional EQ to his sound after the bass amp model, which contained its won internal EQ. That added a bump around 2k while taking away quite a bit from the 100Hz area. I also hit the 1176 compressor much harder that I had done previously which added some nice warm distortion to the sound. This coupled with a mastering process that also concentrated on tightening up the woofy bass, gave Kevin the sound he was looking for. I am glad to see Kevin actively listening to the recordings. I does help me out to have another set of ears to listen, as well as another set of arms to wind up and pack the wires at the end of the night. 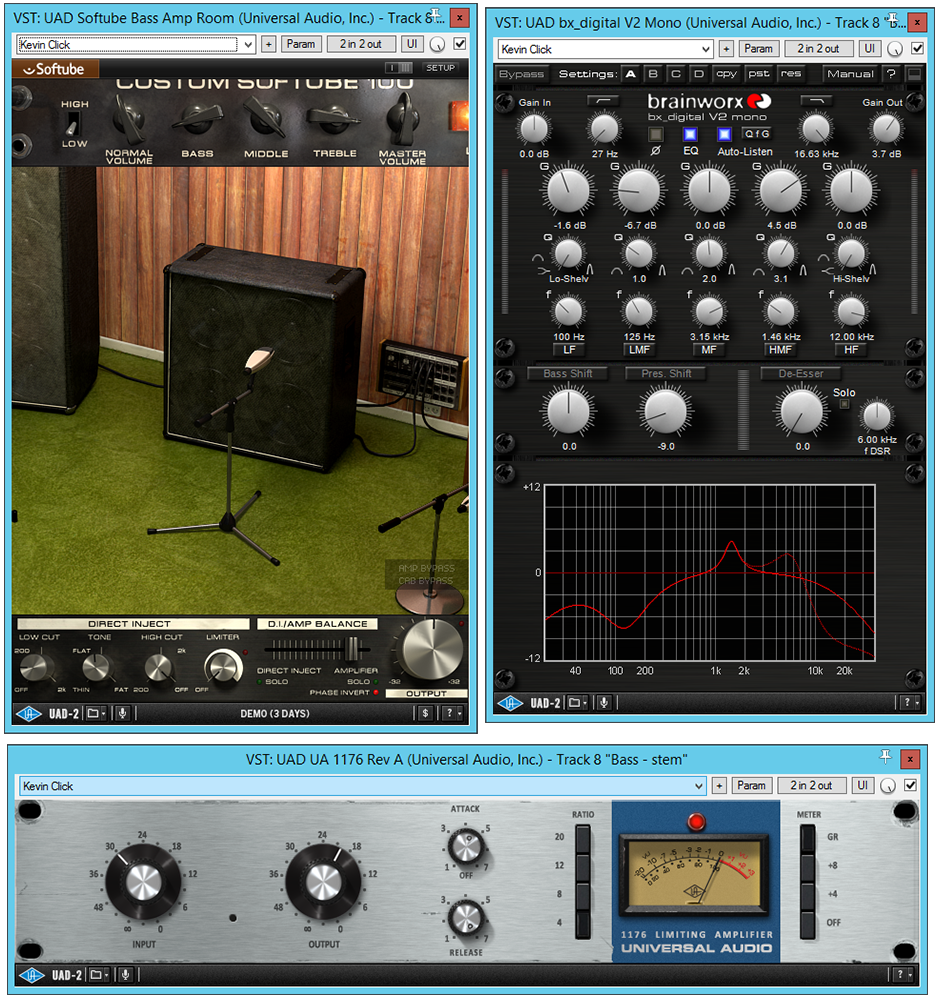 As far as playing actual music, I was kind of excited to be the only guitarist in the room. If we play Jerry Garcia Band music it is more authentic and if we play Grateful Dead music, I can switch between Bob and Jerry's roles without having to think about stepping on anyone's toes. With this in mind we actually focused on Grateful Dead to start and the Here Come Sunshine typically has 2 guitar parts so this would be a test to see how empty my one guitar could sound. From the first note on, the music felt pretty good and comfortable, so issues of not sounding good were not really an initial concern. As a matter of fact, the openness of the one guitar provided lots of space to work and live. Additionally, Lee and Scott were having a man crush with each other and each others drumming and the play between, each other, so that feeling of comradery only helped in the fun of the evening and the quality of the music. Lee thought there was something special going on. I don't know if I was privy to it since I was focusing on my own issues, but if they are happy, so am I. In the end, I think the drumming sounds really good on the recording. Lee's Kit is in the left while Scott's is in the right and together, they give us the full rhythm section we are looking for.

With so much more to say and so little time to write it, I'm going to have to cut off the commentary at this point and just wait to make some more history with Deadstein. Until then, Freak Out!