Deadstein, half a score later and ten years older.

Who would ever think it, Deadstein makes it for ten years of constant playing once a week almost with out a breather.  Being in the middle of the Phil tour at the Beacon made for a short night, one where we did not get to the overly ambitious setlist of our youth.  In our youth we talked Dead tours, now we talk Phil tours, by the time we reach 20 years we'll be talking about Justin Kruetzmann tours.  In cool fashion, Mike Moskowitz, Liz and one of their friends who I don't know stopped by for a quick hello on this momentous night.  It was so momentous, Tommy Snappa-Banjo made his first trip out of retirement.  Congratulations on the birth of his new Tommy-Snappy-Whappa-Ukelele.  Larry and he had some nice moments including the Straw and the Box of Rain. 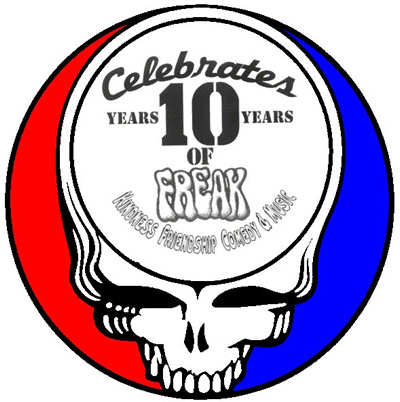 Andy had some nice Stella Blue moments with some rich delayed sounding lines.  It was after his amp broke for the 1000th time which is off to Norwines.  By the way, did you check the fuse Andy?  If you recall there was only a 2 amp fuse in it that we couldn't get to blow at Norwine's but the amp calls for a 2.5 amp fuse, In addition, there was a bag of 3 amp fuses Nowine provided you for when this one was to blow.

Short of that, the music was pretty muddy for the night without the great zeal a 10th anniversary deserves.  The Bertha was very well done.  Food was the diner and I feel pretty good for some reason.  The fish sandwich was enjoyable.  We left at 10:00, a real rarity for Deadstein.

The Mets are winning 6-5 in the bottom of the ninth against St. Louis.  Benitez puts the tying run on with 2 out, a homer wins it but he struck the guy out. This was the longest 9 inning NL play-off game in history.  They are leading this series 2-0 at this point and head back to Shea.  It was an exciting game 2.  The Yanks are 1-1, but Deadstein is officially a Met band and we don't care about the Yanks till they play the Mets in the World Series.  Other issues include the Mideast blowing up between Jews and Arabs as the stock market plummets, oil prices rise and US navel ships get blow out of the water in Yemen.  Till then next Thursday,  Let's go Mets!  Lets Go Jews!!!