Happy Snappa-Wappa birthday to you. Last jam of the millennium and jam #51 for 2000 but more importantly, 2nd to last at WWI.

Well this marks the second to last night of Deadstein at William Weiss Interiors.  What a run it has been.  It all started on July 30, 1997 and three and a half years later we move on.  In early 1998, this run at WWI has seen original drumming members Dave and Larry feud to swap positions in Deadstein in the new millennium.  In addition, in early 1998 Andy Trister joined our beloved fold.  Ironically, he was with us at our last night at Gansevoort Street.  Now at the second start of the new millennium which we celebrated last year we welcome Tommy Snappa-Wappa Banjo to the new, diversified Deadsteino. 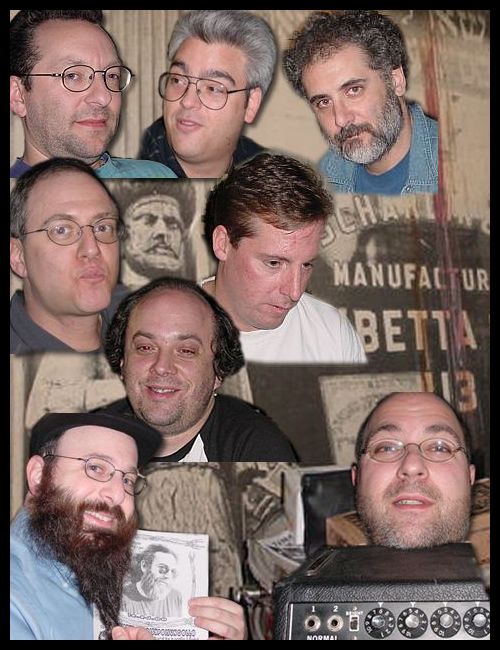 The only guest was Tefillin Ken who was there for just a half hour or so.  There long enought to be annoyed by me taking pictures.  Johnny was a no show.

Speaking of which of Mr. Banjo, this was his birthday show, and like so many birthday shows, ended in disappointment as one realizes two sets just aren't in the picture.  Nevertheless, for the one one set he called for, it was pretty respectable.

I am writing this a day late and almost every song we played is a blur.  I have no idea what was good or bad.  I remember Wish You Were Here.  I was playing bass at that time and have a jolly good time with it.

I took Tom's Pasaat out for an extensive test drive around New York City and one day soon you'll see me pull up in that vehicle instead on Tom.  I don't know what he'll pull up in.  Giant's earn a bye week in NFL playoff in clinch home field advantage if they can take advantage of it.