The big surprised was pulled off by Allison and the rest of Kevin's family.  They got Deadstein out of the hole in the ground in which we dwell into the Harley Davidson Cafe on Sixth Avenue.  It's the sort of place a tired Hell's Angel likes to wet his whistle after and long do of doing whatever they do.  I wonder if they tip the washroom attendants?

Deadstein could learn a thing or two about how to jam in a place like that.   With a bar just over our right shoulder, food just an arm length and a toothpick away and when that time comes, someone who will wipe your ass for a buck.  It's fun to play out at a party even when you can't. Deadstein and Kevin proved it.  We had fun, enjoyed Kevin's birthday with his family and friends saw lots of people come for the occasions.  Most with new kids may I add. 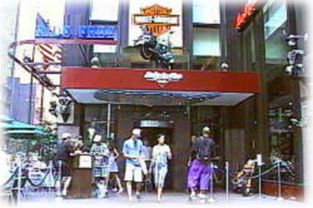 The whole experience was a lot of work.  Scott has a lot of stairs and we have a lot of heavy amps.  Speakers are cake!  The stupid music stands and guitar stands were more of a hassle than the speakers.  The move in and out of the cafe wasn't the greatest either with the cramped elevator over utilized by the cafe staff.  Luckily we had the side door exit on the way out.  That helped a lot.  We just beat the rain for the unload because by my ride home it was a downpour.   Lots of traffic to boot.  Got to Scott's at 9:30 left around 5:30 got home at 7:15.  Too pooped to work on Monday.

Music was good, I was pleased how nice the PA sounded.  We were obviously too loud for a crowd like that and we obviously had no regard for them from that perspective but it was Kevin's party so when in Rome.  You know the rest.

The music was loud but moving, and those that could plug into our energy got a jolt out of us.  Those that couldn't plug into it, well, let them eat cake, and they did. (P.S. For you web watchers, there is a special hidden track 10 on our first CD saying . Now, That's Happy saying "Happy birthday Kevin" don't try to play it backwards because it says "Brrrrp")

Gene came up for his standard Suspicious Minds which he does so well.  We have to figure out a song for him to do with us.  I remember so many times going through the experience of Gene rummaging through the book not finding any songs and so forth. Defaulting to a Not Fade Away.  He did it well although he over tweaked the sound system a bit for its worse moment of the night.

We were stopped by a singing ape that didn't sing.  He should have come on the stage and earned his money.  The cafe staff seemed to really like us.  One of the waiters, the one pushing the spicy Mexican chicken things, said he really like our drumming.  There's one for the rhythm section.  I had trouble hearing Andy a bit through the night.  He seemed a bit subdued.

Hope you all had fun and aren't too busy to do some of your own posting celebrating some of the great moments of the afternoon.  Special thanks to Allison and Gail for making it all happen.