A day of recovery after the storm.

It was the night after the big gig just over 48 hours ago.  I still feel the pain from luggin all the stuff.  The moving of everything was nice because it gave us a chance to clean and simplify everything.   The room starts a new with a new potential.

Kevin was appreciative for the party we threw and gave us our great surprise night.  It was unlimited Jerry Band and we took almost full advantage. 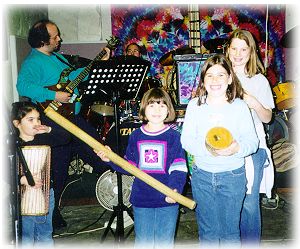 Some of use love playing those songs and they sounded very good throughout the night.  We were able to achieve some of that quiet thing going on.  I hear Andy trying real hard for it and I love his challenges to play softer than him.  There's a lot more validity to that concept when he does it compared to I.  Play it soft and they will turn down.  I'm with the program.

Look Dave, I finally got to posting the picture of the Kids during the Christmas 1998 bash.  Well, it's within 4 months.  When we get the Band photos from Kevins Party we need to post them.

Tore Up was really slinky.  It was "Joe Cool" real nice stuff.

The food was better. Pizza still improving after they sensed an insult on the pie.  Bread and butter is still the best thing the serve.  Thanks to Scott for lending me the symbols